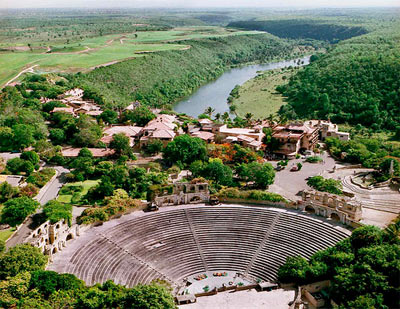 Explore The exotic of La Romana

La Romana is the main city in the eastern region of Dominican Republic, with over 100,000 inhabitants and a distance of 100 kilometers from the capital Santo Domingo. It was created by the Spanish to use it as a commercial export port.

The American company “Gulf & Western” has been responsible for much of the commercial and financial activities of the city since in 1920 greatly boosted the sugar industry in the area through what is now the largest sugar refinery in the country: The Roman Central.

During the 70s this same American company built a few kilometers away from La Romana a multimillionaire leisure and recreation complex: Casa de Campo, which has become the tourist symbol of the area and one of the most complete, luxurious and Exclusive to the entire Caribbean.

Although the economy of the area relies mostly on tourism, sugar cane production has historically been very important, as has agricultural production.

In addition to Casa de Campo, La Romana has one of the most unforgettable tourist attractions in the Dominican Republic: Alto de Chavon, is Mediterranean village recreated the sixteenth centenary with has an artistic workshop spectacular stone amphitheater, in the most Romantic style, with seating for 4,000 people.in the order hand in the center of the city, there is an obelisk painted wich color full images of local life
Other tourist attractions in the area are Bayahibe Beach, just 20 minutes away and Dominicus Beach.

From both and also from the port of La Romana, boats, catamarans, and boats sail towards Isla Saona and Isla Catalina. Saona Island is largest in surface than the Catalina Island and is within the Eastern National Park.

As a whole, La Romana is the most important tourist center of the Dominican Republic, with a very strong tourist activity, a high concentration of hotel and resort offers and a growing development.
The luxury resort Casa De Campo is located near the city.