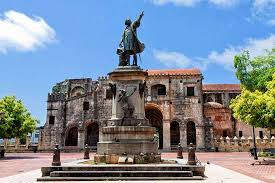 Santo Domingo officially called Santo Domingo de Guzmán is the capital of the Dominican Republic. The city is located on the Caribbean Sea, at the mouth of the Ozama River, on the south coast of the island. Founded by Bartolomé Colón on August 5, 1498, on the eastern margin of the Ozama River and then moved by Nicolás de Ovando in 1502 to the western margin of the same river. Known for being the place of the first European settlement in America, and for being the first seat of the Spanish colonial government in the New World. It is located within the limits of the National District, and the latter in turn is bordered by three parts by the province of Santo Domingo. It limits to the south with the Caribbean Sea, to the east with the municipality Santo Domingo Este, to the west with Santo Domingo West and to the north with Santo Domingo North; between them they form the Greater Santo Domingo whose metropolitan area already exceeds 4 million inhabitants.

Today, Santo Domingo is the largest cultural, financial, political, commercial and industrial center of the Dominican Republic. Santo Domingo also serves as the main port of the country. One of the ports of the city is at the mouth of the Ozama River and welcomes the largest ships, and is capable of receiving both passenger loads and freight traffic.

Santo Domingo took the name of “Ciudad Trujillo” from 1936 to 1961, due to a change made by the dictator Rafael Leónidas Trujillo Molina. Today, Santo Domingo is the most important metropolis in the country, given its GDP Purchasing power parity US $ 36,000 million and is also the most populated city in the Caribbean.

Before Christopher Columbus discovered the island in 1492, the Tainos populated the island they called Quisqueya (mother of all lands) and Haiti land of high mountains and which Columbus renamed La Española, which includes the part that today occupies the Republic of Haiti. At that time, the territory of the island consisted of five cacicazgos: Marién, Maguá, Maguana, Jaragua, and Higüey. These were governed respectively by the caciques Guacanagarix, Guarionex, Caonabo, Bohechío, and Cayacoa.

The first settlement dates back to 1493, the period when the first Europeans settled on the island, although it was officially founded between 4 and 5 August 1498 by Bartolomé Colón with the name of La Nueva Isabela, after an earlier one built by his brother Cristóbal Colón, both settlements were named after the Queen of Castile Isabel I. Later it was later called “Santo Domingo”, in honor of Santo Domingo, who was the patron of Domenico Colombo, father of Christopher Columbus. [5] The city came to be known as the “gateway to the Caribbean.”

Santo Domingo was destroyed by a hurricane in 1502, and the new governor Nicolás de Ovando had it rebuilt at another nearby site. The original design of the city and a large part of its defensive wall can still be seen today in the Colonial Zone, declared a World Heritage Site by UNESCO in 1990. The Colonial Zone, bordered by the Ozama River, also has a impressive collection of buildings of the sixteenth century, including palatial houses and churches that reflect the architectural style of the medieval era.

The most important colonial buildings of the city include the Cathedral of Santa María La Menor, called Catedral Primada de América, which establishes its distinction, the Alcázar de Colón, the first castle of America and residence of the Viceroy of the Indies, Don Diego Colón, son. of Christopher Columbus; the Monastery of San Francisco, the ruins of the first monastery in America; the Museum of the Royal Houses, the old Palace of the Governor General, the Palace of the Royal Audience; Parque Colón, a historic plaza, Fortaleza Ozama, the oldest fortress in America; the Pantheon of the Fatherland, an old Jesuit building that houses the remains of several famous representatives of the Order of the Dominicans, and the Dominican Convent Church, the first convent in America.

Throughout its first century, Santo Domingo was the platform for much of the exploration and conquest of the New World.

In 1586, Francis Drake occupied the city demanding a ransom for it. The invasion and looting of Drake of La Española and with a weakened Spanish domain, the capital was abandoned and left to the mercy of the pirates for more than 50 years. An expedition sent by Oliver Cromwell in 1655 attacked the city of Santo Domingo, but was defeated and withdrew taking Jamaica, instead.

From 1795 to 1822 the city changed command several times. It was ceded to France in 1795, occupied by rebellious Haitian slaves in 1801, recovered by France in 1802, and again recovered by Spain in 1809. In 1821 Santo Domingo became the capital of the Independent State of Spanish Haiti. Two months later the new State was occupied by Haiti. The city and the colony lost much of the Spanish population as a result of these events.

Santo Domingo became once again a free nation, when the Dominicans gained their independence from Haitian domination on February 27, 1844 devised by the Dominican national hero Juan Pablo Duarte. The city was a prize disputed by various political factions in the coming decades of instability. In addition, the country had to fight multiple battles with Haiti, the Battle of March 19, the Battle of March 30, the Battle of Las Carreras, and the Battle of Beler, are some of the most prominent battles, such conflicts are mentioned In the national anthem, there are also streets of the city with their name. In 1861 the country returned to Spanish hands, who reached an agreement with the Dominican leader Pedro Santana for which the latter won numerous honorary titles and privileges, in exchange for the annexation of the young nation to Spain. The Dominican Restoration War began in 1863 however, in 1865 the country was free again after Spain withdrew.

During the next two thirds of the century, Santo Domingo and the Dominican Republic had many other conflicts. the changes of government were relatively brief, to that is added the occupation by the United States, 1916-1924. The city was hit by Hurricane San Zenón in 1930, which caused great damage. After its reconstruction, Santo Domingo was officially known as Ciudad Trujillo in honor of the dictator Rafael Leónidas Trujillo, who ruled from 1930 to 1961. After his assassination in 1961 the city was renamed, Santo Domingo. It returned to be the scene of the fight against the occupation of the United States in 1965.

In 1992 the 500th anniversary was commemorated, the fifth centenary of the Discovery of America. The Columbus Lighthouse was built with an approximate cost of 400 million Dominican pesos, it was erected in Santo Domingo for this occasion.

In Santo Domingo are the first cathedral and the first castle of America; both located in the Colonial City, an area declared a World Heritage Site by UNESCO.